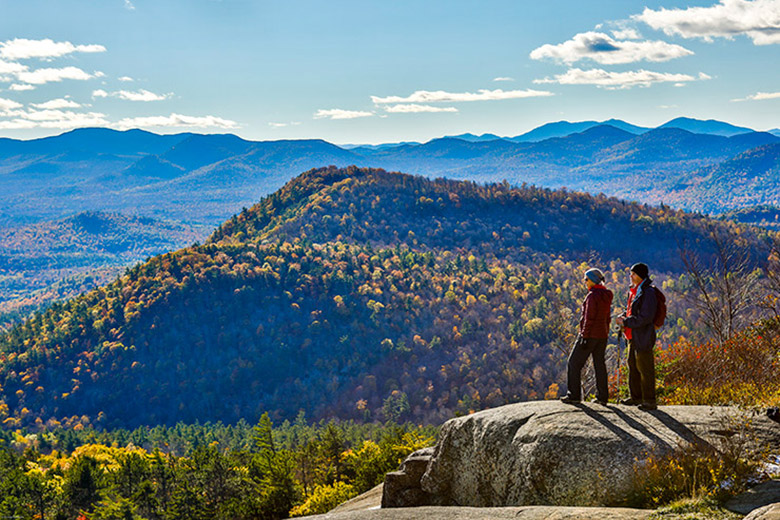 The 2,180-foot summit of Poke-O-Moonshine Mountain is topped with a fire tower and offers sweeping views of Lake Champlain, the High Peaks Wilderness and the Jay Range. The mountain is in the towns of Lewis and Chesterfield, close to Plattsburgh and just a few miles from I-87.

With one of the largest exposed rock faces in the region, Poko’s profile is distinctive. The name Poke-O-Moonshine is understood to derive from the Algonquin words “Pohquis,” meaning broken, and “Moosie,” smooth. East-facing cliffs provide habitat for peregrine falcons and attract rock climbers.

Hikers have two trail options. Both merge into a single trail at a site where a fire observer’s cabin stood in the early 1900s.

In 2006 the Adirondack Land Trust purchased 200 acres enabling the New York State Department of Environmental Conservation to establish the Observer’s Trail and a new parking area. This trailhead is approximately one mile south of the Ranger trailhead along State Route 9. The distance to the summit from here is 2.4 miles. The trail follows a gentler gradient than the Ranger Trail.

From the south end of the old campground at the base of the cliffs, the Ranger Trail is a short, steep climb.